How Drive-Thru Alcohol Helped Breweries During the Pandemic 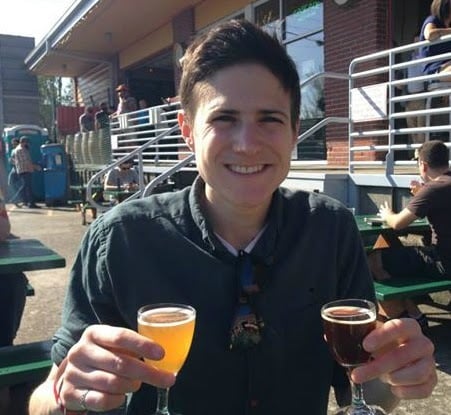 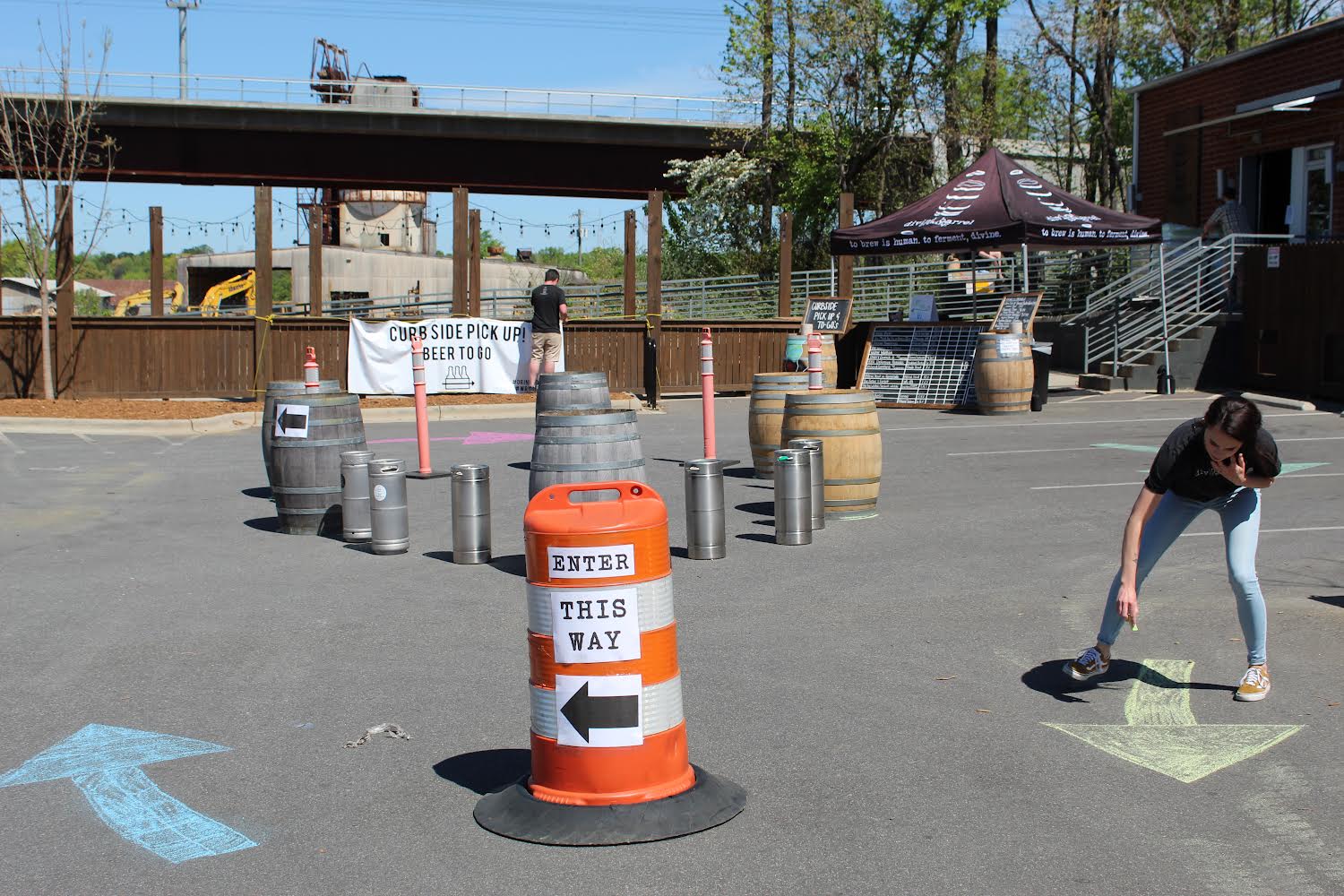 When the COVID-19 pandemic forced many breweries, restaurants, and bars to close their doors to the public, business owners had to come up with creative solutions to continue generating revenue.

Many beefed up their ecommerce platforms, started using QR codes, or leaned heavily into direct-to-consumer delivery. Another handful thought even further outside the box, instituting drive-thru alcohol programs that provided a safe, contactless, efficient way for customers to purchase alcohol.

While very successful during lockdowns, drive-thru alcohol is less practical, especially now that taprooms have reopened to the public. However, if the past year and half has taught entrepreneurs anything, it’s that it can’t hurt to always be prepared.

Here’s What We’ll Cover in This Piece:

What Is Drive-Thru Alcohol? 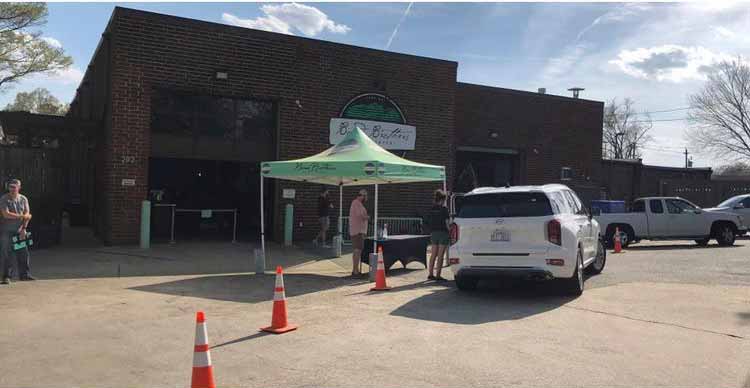 This is how drive-thru alcohol works: Your customers purchase your products (usually online), drive to your establishment, and pick up their package of goods. All from the comfort of their car.

Think of drive-thru alcohol similar to the drive-up window at a Starbucks.

It’s a contactless, safe way for patrons to buy your goods without ever leaving their vehicle.

For many breweries during the pandemic, leveraging this tactic helped drive a large majority of their sales. Especially during those first few months of lockdowns.

Why Drive-Thru Alcohol Was Effective During the Pandemic 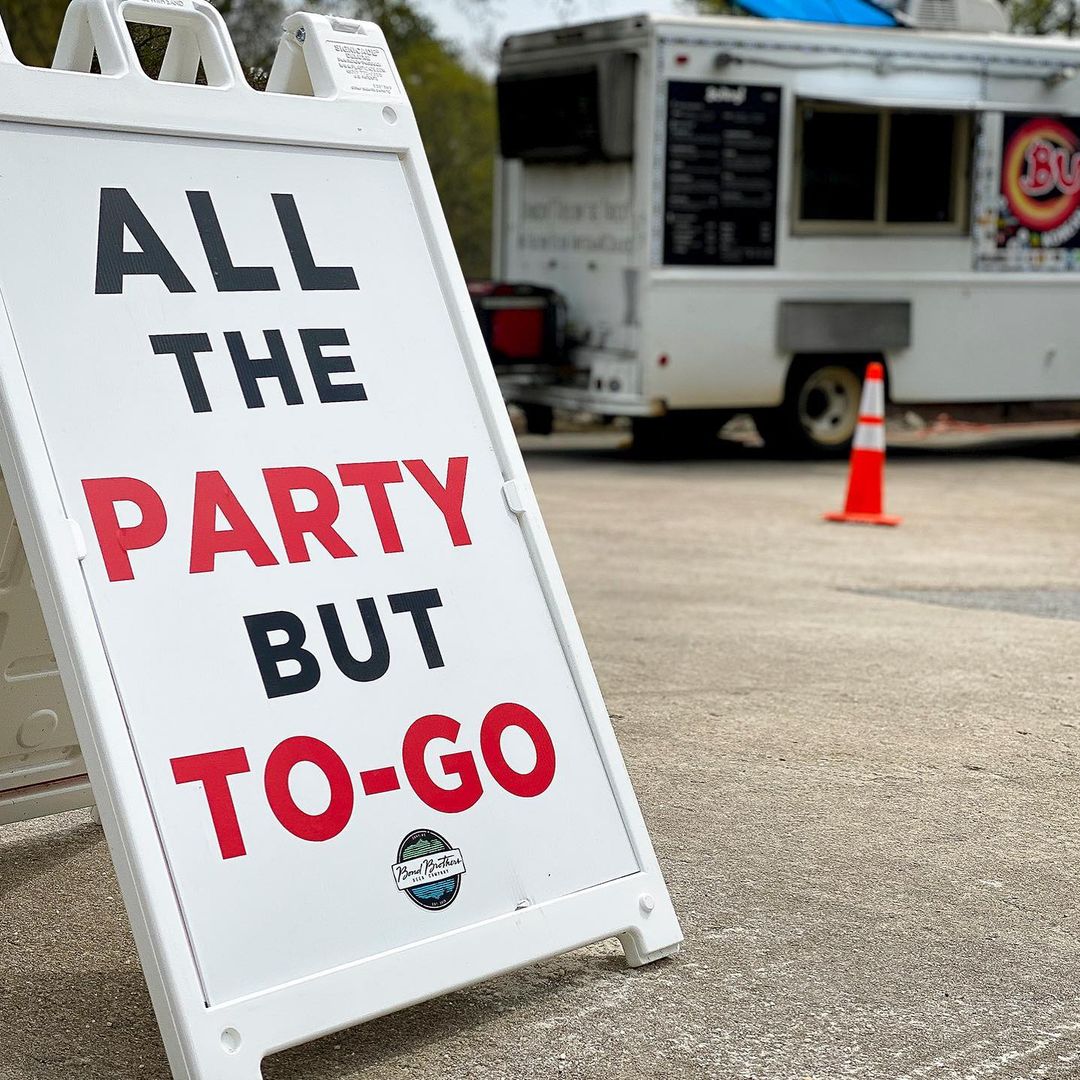 Divine Barrel Brewing Co. in Charlotte, NC, adapted quickly after the city locked down back in the spring of 2020. First, they set up an ecommerce platform. Next, they started a drive-thru alcohol program.

“Honestly, we just wanted to have ease of access and keep everyone comfortable,” says Gavin Toth, Co-Founder at Divine Barrel Brewing Co. “The online store was a no brainer. And man, that shot us through the roof. We got all these preorders...people would drive through and grab them. We couldn’t believe how busy that was.”

According to Toth, during those first few months of the pandemic, the online store coupled with drive-thru pickup drove nearly 100 percent of their sales. And while he joked they “weren’t quite hitting that Starbucks revenue stream,” the ecommerce platform and drive-thru (and later, home deliveries) were the only way they could sell for the first few months.

The first Tuesday the drive-thru opened, Toth says the brewery hit weekend sales numbers. “We made more money on a Tuesday than we even make on a busy Saturday before COVID,” says Toth. “It was a great way to start off.”

Similarly, Bond Brothers Beer Company in Cary, NC, leveraged the advantages of a drive-thru during their own lockdown. They set up the program pretty much right after the pandemic hit.

Located centrally between Durham, NC, and Raleigh, NC, Bond Brothers agreed to not only sell their own beer through the drive-thru, but also those of neighboring breweries.

“We needed to sell our beer, but we also knew our friends needed to sell their beer,” says Jay Bond, Co-Owner of Bond Brothers Beer Company. “[We decided to] do the drive-thru during the pandemic so we could give everyone a centralized location to come to instead of having to travel and risk getting sick.”

Bond notes that while he doesn’t have any specific numbers, during the peak of the drive-thru their sales numbers actually returned to normal non-pandemic rates. Additionally, according to Bond, eighty-five to ninety percent of the guest beers available would often sell out.

“It worked really well during the pandemic. It was an efficient, contactless process…[and] people really enjoyed it,” says Bond.

With both breweries and consumers happy, implementing a drive-thru alcohol plan was a win-win. 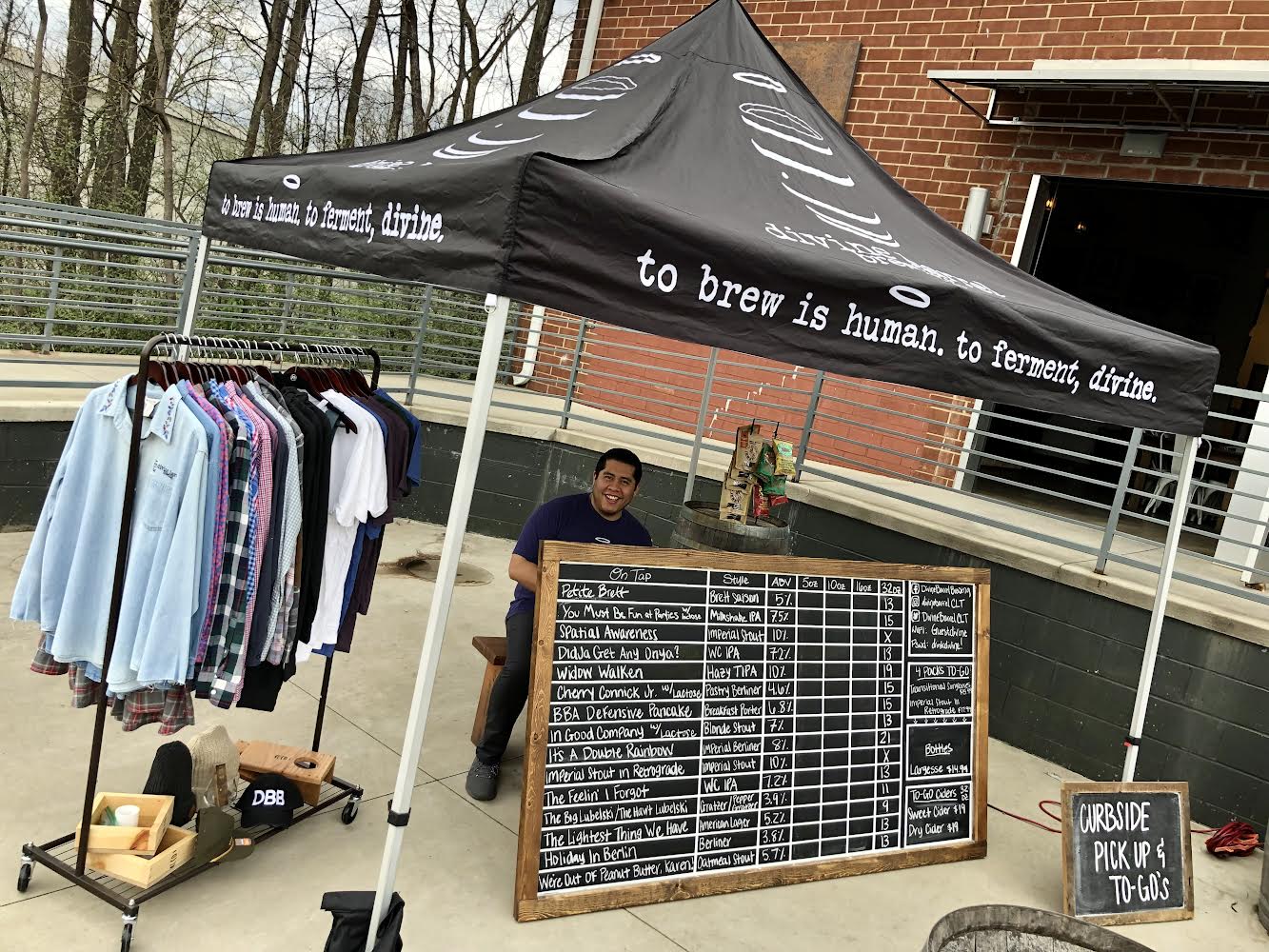 Obviously, each brewery approached their drive-thru set up slightly differently. Mostly, the design depended on space and equipment. But essentially you just need a table, a tent, and maybe a chalkboard or sign. Generally, it’s a fairly low lift.

For example, Divine Barrel leveraged their huge parking lot, popping up a tent with a foldable table underneath. They also moved a big taproom chalkboard menu outside to display the beers available along with a rack of merch to sell on the spot. “We tried to make it like we were at a beer festival and not just your everyday boring what-do-you-want table,” says Toth. “We brought a little bit of flavor out to our patio while we sat in the parking lot.”

Operationally, Toth says one person fulfilled all the orders, grabbed cans and filled crowlers, while another would run them out to the car. “These folks were busy. We didn’t have to fire or furlough a single person because of those online sales,” says Toth. And the team continued to refine their sales process.

Similarly, Bond Brothers just popped up a tent with a table underneath right outside the entrance to their taproom. “We’d get all the orders during the week through our online store. Our team would package them all up. People would just drive up and give us their name. We’d go into the brewery, grab it, and put it in their truck for them.”

Beerwise, Bond Brothers offered their beer along with four or five others in the area on any given weekend.

And at Divine Barrel, everything in cans could be purchased through the drive-thru. “It was definitely come and get everything,” says Toth, who notes that the brewery went from canning twenty percent of its beers pre-COVID to one hundred percent during the height of the pandemic to accommodate for these online sales.

If you do ever run drive-thru alcohol sales, make sure that you let your customers know through social media. It’s the best way to advertise that pickup is available.

And since, on any given weekend, Bond Brothers sold beer from four or five different breweries, they could leverage the social media platforms from their neighboring businesses as well. 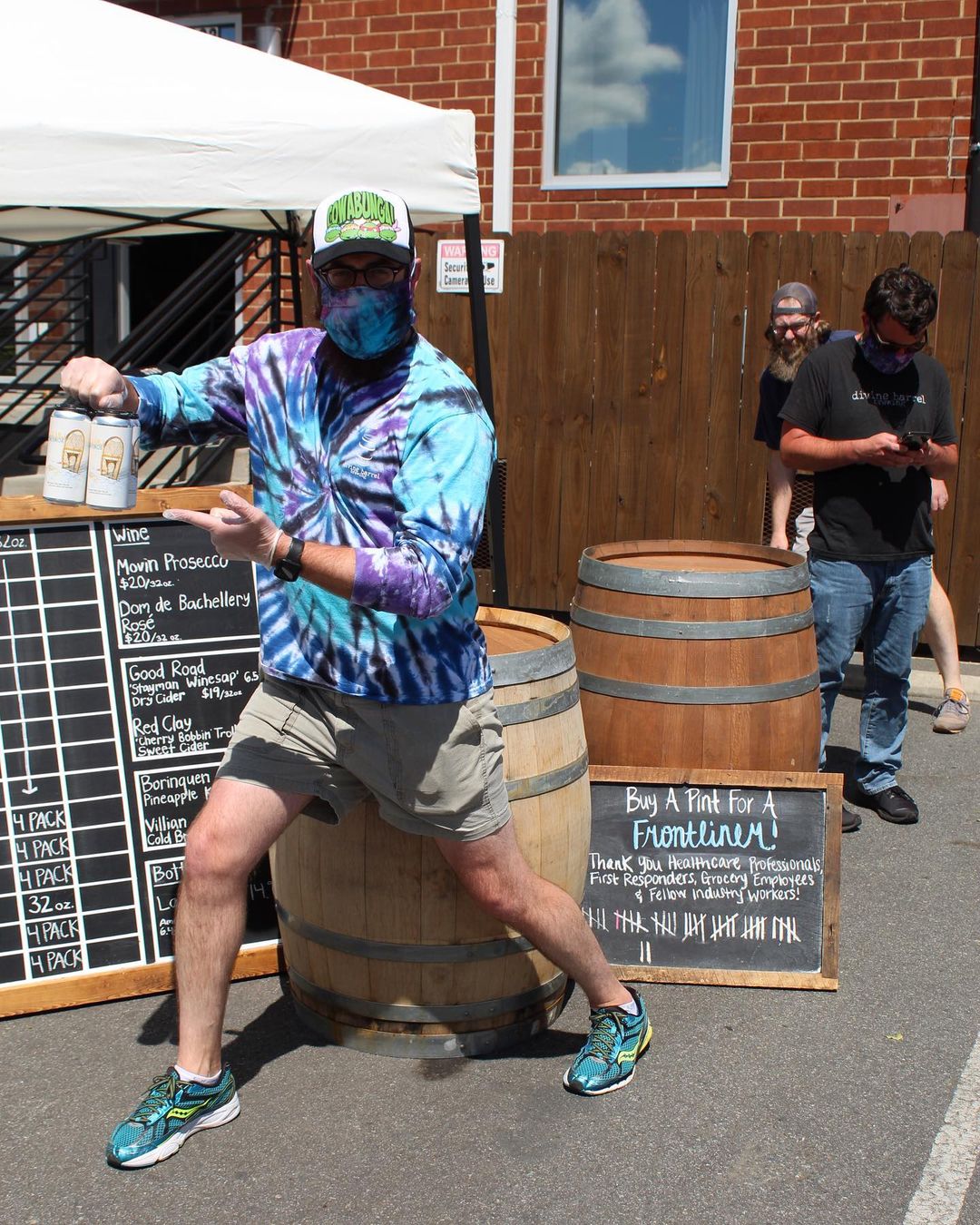 Although both Toth and Bond praise the success of their drive-thru alcoho,l they agree that they didn’t need to continue the program.

Divine Barrel’s drive-thru operation lasted about three to four months in the beginning of the pandemic. “We did eventually take it away because it wasn’t necessary,” says Toth. “We wised up and realized people were okay with getting out of the car and walking up the patio.” Instead, the brewery started selling beer from a to-go window at the main entrance. The setup became easier because they didn’t need a presence out in the parking lot.

For Bond Brothers, it just didn’t make sense to keep the drive-thru for more than a few months. “People were itching to get out and just hang out,” says Bond. “Now that they can, that's what they want to do.”

Still, the drive-thru served its purpose when breweries like Divine Barrel and Bond Brothers needed it most, getting through those first tricky months of the pandemic.

While a drive-thru program may not be necessary right now, it’s a good tool to have in your back pocket.

“Doing the kitchy drive-thru was gimmicky, but it worked,” says Toth.

Post by Grace Weitz
November 15, 2021
Grace is the Managing Editor for Hop Culture and Untappd. She also organizes and produces the largest weeklong women in craft beer festival in the country, Beers With(out) Beards and the first-ever festival celebrating the colorful, vibrant voices in the queer community in craft beer, Queer Beer. An avid craft beer nerd Grace always found a way to work with beer. After graduating with a journalism degree from Northwestern University, she attended culinary school before working in restaurant management. She moonlighted as a brand ambassador at 3 Sheeps Brewing Co on the weekends before moving into the beer industry full time as an account coordinator at 5 Rabbit Cerveceria. Grace holds her Masters degree in the Food Studies program at NYU. 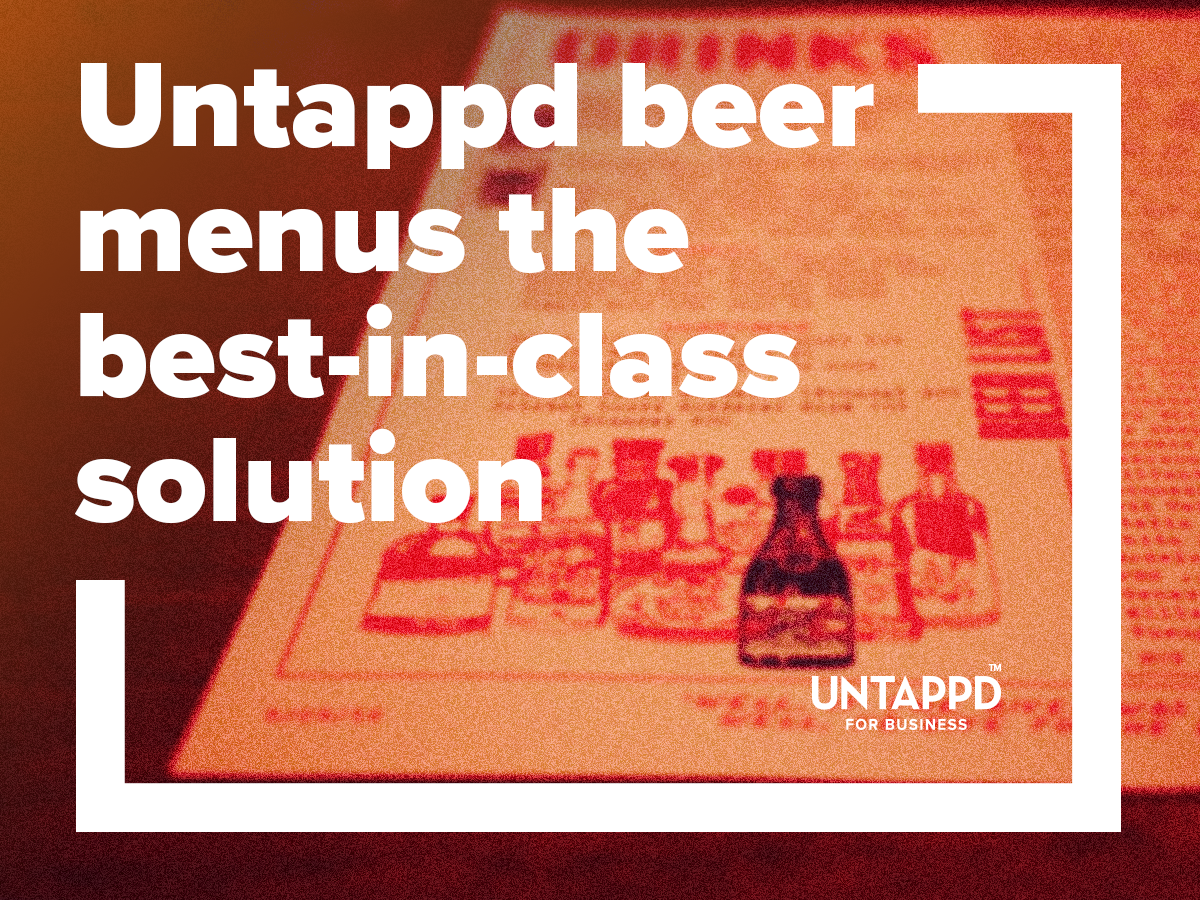 How to Design a Brewery Logo And Develop Your Brand (2021)

Brewing great beer is important but if you can’t represent the soul of your brewery through your branding, no one will ...

As France begins to experience its own craft beer revolution, the Brewers Association and Untappd are working together to ...

How To Find The Best Craft Beer Name

If you’ve ever had daydreams of naming dogs, babies, or hypothetical cover bands, you know the excitement of finding the ...